As a speaker, I'll shine a light on widely held industry beliefs and behaviours, dive deep behind the psychological scenes of the creative experience and guide the audience towards new work-life possibilities, and their own personal insights. Drawing on 20+ years in the creative industry, I can connect deeply with a creative audience as I speak from a very empathic point of view. I've literally been there, done that and still wear the T-Shirt.

Every talk I do is to share something impactful with the audience, it’s to introduce new perspectives and offer useful takeaways to support everyday creative life.

Whether it’s at an industry-held event or with a small creative team in an agency, I'm flexible to the size of audience I speak to and the format of delivery. It can be a 20 minute session at an event, a 45 minute keynote, a half day workshop or a full day deep dive. It can be speaking to Creative Directors, Art Directors, Advertising Creatives, Graphic Designers, Digital Designers, Broadcasting Creatives, Product Designers and such. It can be to 5 people or to a 1,000.

Who I speak to determines the content and style of my presentation, as everything I deliver is bespoke for each group, audience or organisation. The topics I speak about all focus on the workplace experience of professionals in the creative industry and of how to both survive it and thrive in it.

Some of the topics I speak about are:

If you’d like to book me as a speaker, please go to the Contact Form on the Contact page and let me know more about your audience and your event. 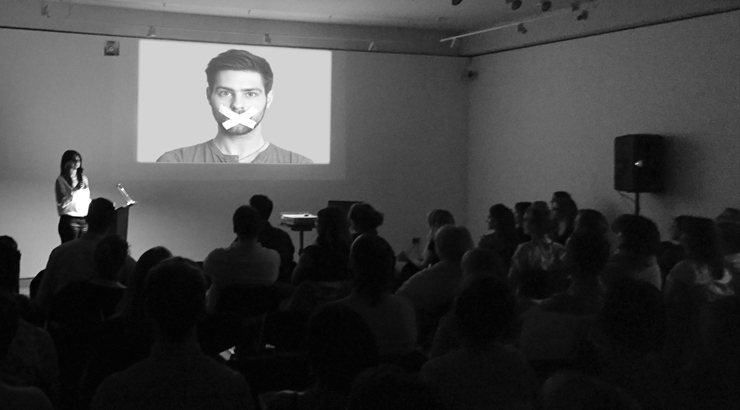 Imagine if you left Art College to go to your first interview  and while nervously sitting there, the first question  you were asked was   “How many new ideas do you have a week?” or   “Do you think you’ll run out of new ideas in 20 years time?”   Thank goodness that’s not how it goes, but it is the  hidden demand of our industry. ” Donna Churchman
PechaKucha: (the Japanese word for chit-chat) is a presentation style in which 20 slides are shown for 20 seconds each (6 minutes and 40 seconds in total). The format keeps presentations concise, fast-paced and devoid of waffle.

PechaKucha Nights, which host a number of talks in one evening, now happen in over 900 cities around the world and can be viewed by joining pechakucha.org

The challenge for the presenter is that the slides run automatically, so you have to keep up with your narration – if you go too slow, too fast, fumble your words or get lost, slides just pass on by without comment.

I presented my PechaKucha on Creative Block & Flow in London during Design Week. It was a pleasure to present such a visual representation of my two great passions: design and understanding how we experience life.

PITCHING IDEAS AT REASONS TO: 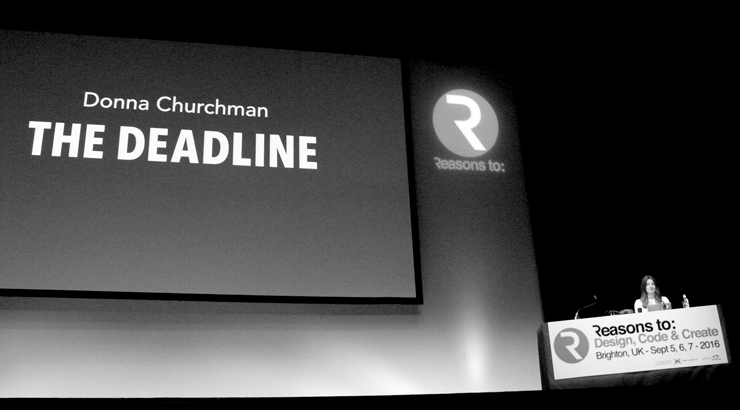 Every year they run a presentation called The Elevator Pitch to the 750 people sitting in the comfy seats of the Brighton Dome. It’s a ‘mish mash of designers, developers and creatives throwing down their stuff in 3 minutes’.

I always have a lot to say but I managed to squeeze my point ‘how it’s not pressure and deadlines that make you do your best work’ down to three minutes, with a big screen and a few big words.

Here’s the pitch I presented:
www.creativeblockandflow.com/articles/pressure-deadlines-dont-get-perform-best/

Reasons to: 3 days of inspiration, creative entertainment and fun every September:
https://reasons.to

300 CREATIVES FROM THE BROADCASTING INDUSTRY 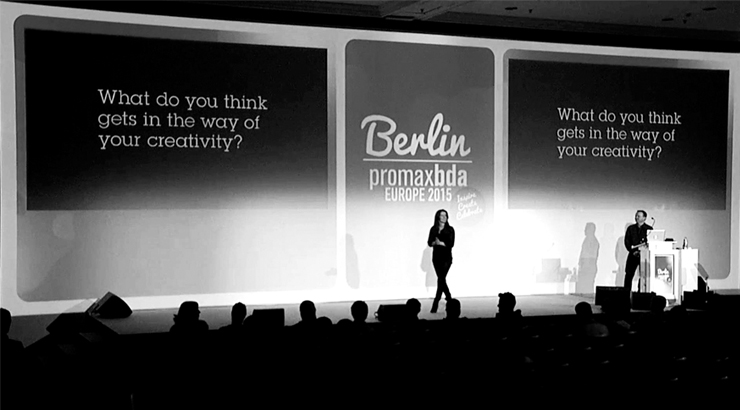 I’ve been having weekly brainstorming sessions with another creative. Every time we meet up we can’t come up with anything new and it gets worse every time. I’ve felt blocked. Now I can’t wait for the next meeting as I now know what’s going on. Creative Director attending the Promaxbda session
Promaxbda Berlin, I presented a talk to 300 creatives from the broadcasting industry titled Creative Flow: Can understanding how we think make us more creative? These incredibly talented professionals were from companies such as the BBC, Canal+, Discovery Channel, Red Bee, Turner, Gédéon, Disney and many others.

These creatives were at the top of their game and picking up their awards later that evening, but even though they were the best of the best, they still encountered the same universal experience of creative block and flow, which they shared after the session.